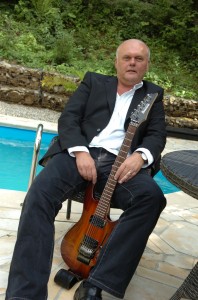 is recognized as one of the most influential and successful German composers and can look back to over 1.000 radio and television appearances.

In 2001 he became honourful membership of the „International association of VIPs“ followed by their greatest award – THE GOLDEN GLOBE in 2008! He is established on the music market since 45 years, graduated by GEMA as extraordinaire composer and writer. He is also a multi-instrumentalist, before all a highly recognized virtuous guitarist and music producer.

For example he wrote the anthem for the athletics world championship 1993 „Hello Stuttgart Go“, the titletracks for the „Starclub-musical“ in Hamburg performed by the Rattles 1997, the Anthem for the German Olympic Team Sydney 2000 nominated by the German Sport Aid „Welcome to Australia“, the worldwide released instrumental series „Dreamworld“,  „Dream Spirits“, the german version of „Lemontree“ (Engel sterben nie), the alternative European anthem „Europeana“  and many more – all in all 130 released CDs on more than 2,5 million units.

In 2010 he established the songproject for children  rights „Rock for your children“ accompanied by national and international prominent names of all genres and business.

In 2016 he was honoured by the GERMAN ROCK AND POP AWARD,
cultureprize no. 1
(„Deutscher Rock- und Pop Preis“, Kulturpreis Platz 1)

In 2018 he received the GLOBAL MUSIC AWARDS in USA for his song „Live your life today“. He also received the GERMAN ROCK AND POP AWARD 2018 for „Best Guitarist“ and „Best CD-Album (english)“ for his jubileealbum „The World Anthem“.

In 2019 his song „We are we’ll be“ was accepted as The Orchard suggestion for GRAMMY-nomination as „Song of the year“ by the Recording Academy. He received the HOLLYWOOD SONGWRITING CONTEST, the AMERICAN SONGWRITING AWARDS, CONCORSO VIVERE DI MUSICA, the GERMAN SONGWRITING AWARDS plus sensational 10 prizes of the GERMAN ROCK AND POP AWARD (for example No.1 „Successful Musicproducer“, No.1 „Best Composition“ or No.1 „Best Popsong“!)

In 2019 he reached the Top 10 of the US-Country-Charts
with „Real Love“, Artist: Chris Brandon.
In 2020 again he won sensational 12 prizes of the GERMAN ROCK AND POP AWARD, before all first time in Germany the special prize for his LIFE ACHIEVEMENT. So he is one of the most successful „German Rock And Pop Award“- winners of all times.
In 2020 he reached 29 international awards for his songs „Live your life today“ and „Send me a little light“, both are played in rotation until today on over 800 radiostations with an audience of about 1 billion listeners.
His first biography „Kriminaltango“ was released as book and as E-book.In 2021 he was WINNER of more than 120 international and national music- and filmawards.

Most of his commercial success comes from the instrumental releases, also used for movies, TV, Video, special marketing and broadcasting.
Join the world of CONNY CONRAD ! For more information, orders and bookings please click contact